*Warning: This blog contains a non-graphic discussion of sexual violence*

FYI the post is 1,200 words and contains an invitation to a webinar on the subject

You may recall a series of posts and white-paper I published titled ‘How to Stop a Culture of Harassment Dead in Its Tracks.’

The article continues below 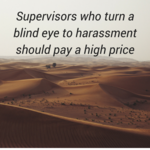 This white paper will walk you through the issues and fixes to make sure you provide the safest possible workplace for all of your people.

Success! Now check your email for your whitepaper.

Though the response was positive, I did get one response from one man whining and whinging that I missed the point because men are also harassed in the workplace.

Yes, that is true. But the advice in the white-paper is applicable in any workplace and any diverse workforce.

So, to that gentleman and other men who may be offended by the fact that women are more likely to find themselves in unsafe workplaces … stop reading now.

If you’re a man who wants to part of the solution, I have this to say:

You are a man.

You likely have power over women by the sheer virtue of your gender & size.

If you are a man who is a boss, you most certainly have power over your employees regardless of gender.”

To that, and as a male boss, I would suggest that you are neither that handsome or that charming that a female employee smiling at you or being polite is equivalent to her giving permission to touch her inappropriately; or ask her for a date; and, it is most certainly is not permission to show her your penis.

For god’s sake, as I guy who served 22 years in the army and was surrounded by mostly male bodies, nobody wants to see that!

Men have their eyes opened to the open secrets of the prevalence of workplace sexual harassment and assault after high-profile cases including those of Patrick Brown, Jian Ghomeshi, Harvey Weinstein, and Louis C.K.

Those cases inspired #MeToo, but now men who thought they treated women as equals in the workplace are starting to wonder if they have overstepped — overtly or subtlety – in a way that would get them in a #MeToo post.

In fact, many are worried and frustrated about what to say and do so they don’t get in trouble. Some, to the point of abdicating their leadership roles by not being alone with or disciplining female staff, and cancelling work social events over their concerns.

Some say they follow the “the Pence rule” or the “Billy Graham rule,” which says … do not eat alone with a woman who is not your wife and never attend an event without your wife if alcohol is served.

On this point, I would suggest that you…

We are adults. Most of us are decent human beings.

If you must follow archaic rules to guide your morality, then you have another problem.”

The pendulum has swung

Yes, the pendulum has swung from a head-in-the-sand approach and victim blaming to lynch the bastard at the first sign of trouble.

Personally, I’m Okay with it.

If a man who has demonstrated a pattern of inappropriate behaviour happens to get squished by the swinging pendulum, so be it.

Nor I am buying the “All Men Are Too Dumb to Understand How to Treat Women at Work” lie some tell.

Eventually, we will find equilibrium and the middle ground on the issue.

Till then, I have a couple of thoughts on how to touch:

– DO NOT give a kiss in the workplace

A couple of things to improve the climate for the women

1. Read the room. If the person you are with reacts uncomfortably by your words or actions, STOP doing it.

2. Ask before touching. Instead of grabbing Mary in a bear hug, try … ‘Hi Mary, it has been a long time … then stop! If she initiates a hug, see above.’

3. Before you say something off base or touch someone inappropriately think about your wife, daughter, mother, or girlfriend. How would you feel if someone did what you are about to do to them? Does sounds right, fair or just.

I’ll leave the final word to Nicole Stamp. Nicole is a director, actor, and television host living in Toronto. (www.twitter.com/nicolestamp) In response to her male friends asking: How can I help?  She wrote an essay in response that was shared 70,000 times on Facebook and the commissioned by CNN

Here’s a summary of her essay, which describes concrete ways that men — in fact, people of any gender — can help improve the climate for the women around them.

– Say: “That’s not cool” or “That’s not funny” Say it to other men who are saying disrespectful things to or about women.

– Amplify women’s voices at work. If a woman’s contributions are being dismissed, interrupted or claimed by others, speak up. “That’s what Monique said.” “Hey, Zahra has a point.”

– Be mindful of how you introduce women, particularly at work functions. Use a person’s full name and job title: “This is Professor Maya Campbell, our department head.”

– Don’t use gendered or misogynist insults ‘like bitch or slut.’

– Give extra space after dark. If a woman is walking alone at night or in a secluded area, recognize that she’s probably nervous. So, if you’re walking behind her, increase the distance between you or cross the street to pass her. It’s a small courtesy.

– Don’t be dismissive or argumentative during conversations around types of oppression that you haven’t personally experience and never minimize their experiences as being “overly-sensitive.”

Nicole closes with this:

“So, when discomfort arises around these topics, the best response is to accept the feeling — and keep the discussion going.

Try not to change the subject, or make your own feelings the centre of the conversation.

Sincerely try to understand other groups’ experiences. Apologize for your mistakes. Be willing to change.

And above all, keep listening. It’s hard. It’s worthwhile.

Thank you for being decent. We see you.”

Download Your Copy of 'You Can't Lead From Behind'

5.0 out of 5 stars Powerful book with simple steps to success as a leader!

Steven Armstrong does an amazing job in this small but powerful book highlighting the fundamentals to strong leadership.

He delivers practical approaches to improving our effectiveness as leaders and demystifies leadership in the process.

Keith J. Johnston - Author of A Garage Full of Ferraris

Success! Now check your email to confirm your subscription.

Six Tips to Partner With Your Boss